Having said this, however, I would add that I believe the use of AR glues, in making copies of historical instruments, and in instrument restoration, is inappropriate for many reasons, the foremost, for me, being one of aesthetics. But wait, you say, weren't all those sound-boards, mentioned in the preceding paragraph, very likely to become antiques themselves one day, given enough time. Yes, you are right, and the point is well taken, and yet we mustn't overthink the point. All I can say about this is that I have no criticism for anyone who can say that they did their best, with the knowledge and tools available.

On this project I will be using hot hide glue, in future posts I will refer to this simply as hide glue. Not to be confused with liquid hide, or any other type. The stuff I'm using is 376 gram Bloom strength, pictured above, (this strength is measured with a device called, I kid you not, a Gelometer) it has many qualities that recommend it for this type of job. It is the same, or very similar to the type originally used, it is very reversible, especially when the joint was recently assembled, unless hydrated it is usually brittle, and will fail before the surrounding wood, which can be advantageous.

At room temperature hide glue has a relatively short open time, around one minute at 70°F after which the glue begins to gel, and will no longer create an effective bond. This property, however, needn't be seen as a drawback, hide glue in its hydrated state can easily be reactivated with a little heat. In the case of small joints, Violin tops for instance, a small amount of warm water brushed on the joint is sufficient to reactivate the glue, and swell the joint together. On other joints, a warm clothes iron or heating pads can be useful. This allows for the careful positioning, and re-positioning of tricky assemblies.

Some stages in the making of the lower shelf of the pin-block stretcher assembly. Although I had originally intended to make this piece of the same construction as the original, I have been unable to obtain wood that satisfies me as to grain orientation. Above; a couple of five quarter, flat sawn German Beech planks, which in the lower photo have been re-sawn, and turned so that their radial faces are uppermost. Below; the six pieces glued together, the adhesive is Urea Formaldehyde, which is not reversible. This type of construction is more stable than the original, which, although being radially sawn, was very badly twisted in service. I can't help but feel that this was due to more than just the pull of the strings. The finished panel, jointed and planed up oversize. In its final incarnation this piece is tapered in longitudinal section, and tapered, bass to treble, in plan view. Below, the panel is planed to the major thickness, before tapering, and cut to the plan
Read more
July 17, 2017

I no longer joint sound-board panels with the machine, ultimately the hand plane does a better job. Unlike the hand plane, the machine Jointer produces a series of little scoops, the frequency of which depends on the feed rate of the work. A dull machine also tends to crush the wood cells, rather than cutting through them, which can cause a poor glue joint. At least one manufacturer of pianos is still jointing sound-board panels this way. In the first picture you can see the very simple jig, or shooting board, that I use for jointing thin boards. On some, more traditional shooting boards, there might be a wooden hook at one end to hold the work. My jig uses small C-clamps (see below). With the work clamped in place the board can be planed with the long, 24 inch, jointer plane. This keeps the edge square, and saves the worker the trouble of balancing the plane on the thin edge of the board, were it clamped vertically.  How force is applied to the hand plane, determines whet
Read more
August 13, 2017 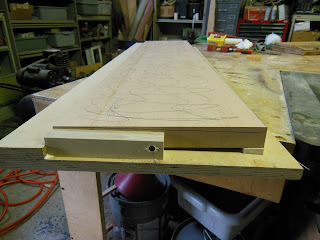 The planing sled, above, is a simple jig which allows uneven, or thin stock to be passed through the planer. In this case the work is shimmed up on one side so that a taper may be machined. Above, the planing sled and part passing through the machine. Below, the resultant taper. After some manual touch up the shelf is temporarily installed in the piano, at this point the piece fits snugly, which is far to tight as there will be a layer of Planetree veneer on both the top and bottom.
Read more