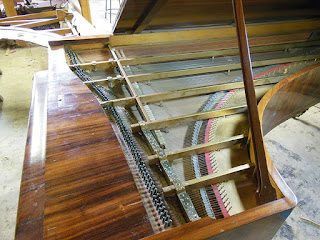 Let's start with the general condition of the instrument. The Erard log books says this instrument was built in 1843, and is veneered with Courbaril, which is a south American hardwood similar to Rosewood. The present condition of the case is good, although it was recently refinished with nitro-cellulose lacquer, which is decomposing. In many places the veneer shows signs of telegraphing, which indicates movement of the structure beneath. The treble corner, visible in this photo, shows a slight change in elevation, The log book also tells us that the piano originally had six bars. A close look at the photo above shows 7 bars, the bar in extreme bass was added more recently, probably sometime in the 1990's. The four transverse bars, which are welded in are also a recent addition. In the above photo we see two of the more interesting additions to this instrument. Two clamps which although ugly, and out of place, appear to have been cast and machined from Bronze, which s
Post a Comment
Read more
More posts