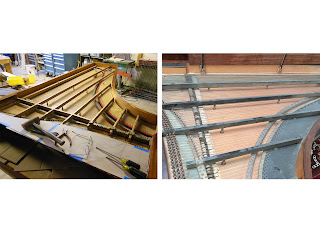 In the collection at Period Piano Center, we have an Erard 1844 serial# 16234, made in Paris, and one year newer than the instrument I am working on (ser# 15908). The contrast in the condition of these two instruments is useful for illustrating some points I would like to make about the uses, and usefulness of conserving and restoring nineteenth century pianos. We usually think of these terms, conserving and restoring, as being antithetical, but this depends on which qualities we are conserving or restoring. In both cases information is lost, but also in both cases information is discovered, which would not have been, had the instrument remained otherwise unmolested. Some conservators speak about the desire to be able to play an instrument somewhat dismissively, forgetting that playing is an important facet of the study of an instrument, and not simply entertainment. The Erard no. 16234 is an example of an instrument I would not touch. Although not playable, it is in otherwise orig
Post a Comment
Read more
More posts