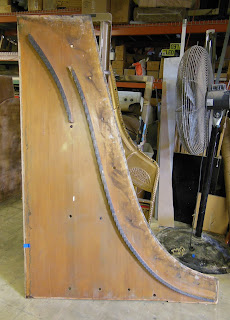 Here are some better shots of the board, front and back, so that you can see the bridge, and rib structure. I have made quite a few modern soundboards, but none like this. The panel, as I said before, is about 5mm thick, with no appreciable taper that I can detect so far. Grain orientation of the panel is longitudinal, the individual boards are wide, some over 300mm, which means that, although they were cut from large trees, there is a large variation in grain frequency within a single board, the exception being the treble, where the boards are narrower, and the grain tighter. In the extreme bass, however, the grain width exceeds 3mm. Although the many of the ribs have, close to, modern widths, none stand much above 13 or 14mm. The ribs are widely spaced, except in the treble, where they are closer together, and very small. Where a rib intersects with the central spine it is mortised into the spine. The four ribs in the middle of the board pass through the spine, the joint there b
Post a Comment
Read more
More posts