Here is a picture of the ribs roughed out, the central spine consists of two pieces (Spruce) that will later be steam bent, and glued, the top bridge is made in a similar fashion. A modern multi laminate bridge can be made cold, and will hold its shape, but with only two laminations, there would be a large amount of spring-back. Below the steaming/laminating form takes shape out of layers of plywood, one side is a single piece attached to a stationary base, the remaining being individual movable blocks. 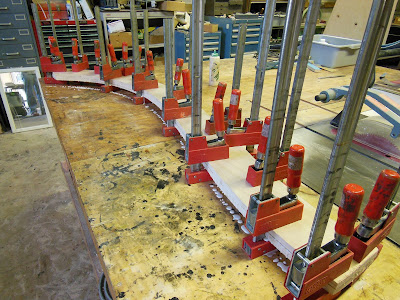 The offset between the blocks is 30 mm, which is the width of the bridge before final shaping. 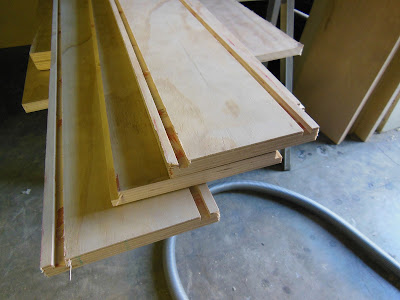 Above the sides of the steam box before assembly, the box is eight feet long, by about six by six inches, just large enough to accommodate the long thin strips of the bridge and spine. Below; the box assembled. The parts to be bent are suspended on a row of half inch Maple dowels that span the interior of the box allowing the steam to penetrate from all sides. 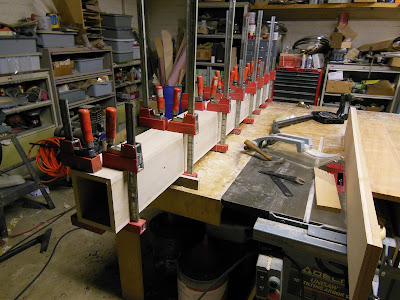 Steam comes from a five gallon can filled with water on a gas burner. A plastic tube leads from the top of the can into the steam box. The box sits on two saw horses at a slight angle, with the steam entering the bottom of the box on the high side. On the low end of the box a drain is provided to remove condensate. Steaming will take around one hour, following the general rule of one hour per inch of material.