Skip to main content
June 14, 2017
At this point I had originally intended to talk more about the pin-block assembly, and how it might be properly recreated. Instead I will move on to the removal of the hitch pin panel. The last remaining part of the plate. This will give some time to think about the pin-block stretcher assembly. 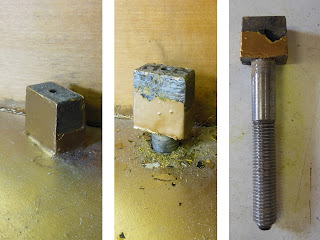 The previous restorer did not manage to remove the hitch-pin panel, the photo above shows why. He did chisel around the perimeter of the plate, because he thought that perhaps the plate was built into the rim. This is perfectly understandable, as many American pianos, of this period, have just this type of structure. Had he not done this I probably would have done it myself, but as luck would have it I benefited from his 20-20 hindsight. This allowed me to look elsewhere. What I found was this; the plate bar support blocks on the hitch panel, are actually the heads of very large bolts, which penetrate the hitch panel, its support block, and almost entirely though the inner rim. After these, six, were removed the plate came out quite easily, and proved to be a very flimsy structure around 7, or 8 millimeters thick. 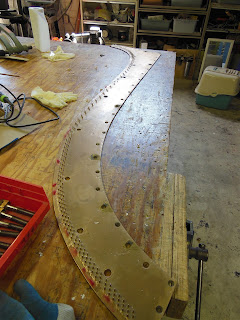 Below is the back of the panel, which looks, superficially, very much like a piece of modern hot-rolled steel. You can also see in this picture, how the ends of the hitch-pins were trimmed of with a chisel. 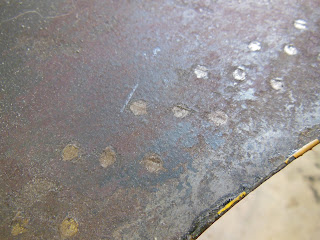 The rest of the hitch panel support hardware, and nose bolts. 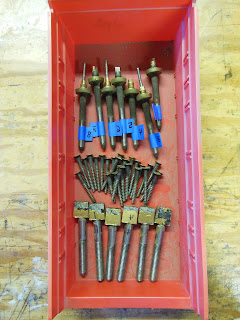 The instrument with the panel removed, showing the hitch-pin panel support strip. 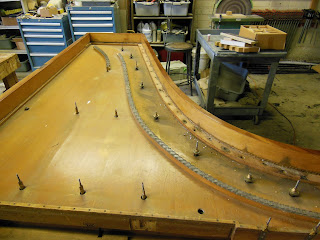 The next job, and a very nasty one it is too, is the removal of this strip.