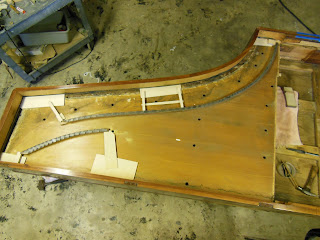 Before I can remove the sound-board, I have to make a set of patterns to record the position of the bridges. I would do this even if I were not replacing the board. The patterns are made of Baltic Birch plywood and are registered to marks on the inside of the case.

I put the piano on its side on the skid-board, so that I have access to both sides. At first I thought steaming might be a good way to go, but the belly rail section came off fairly easily, as the glue was somewhat dehydrated. I ended up soaking the straight side. In hindsight steaming would have been the better idea. Below is the board almost out. 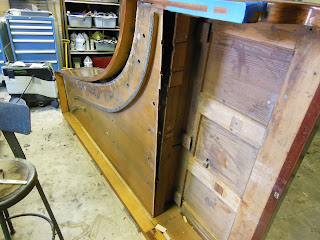 I apologize for the poor quality of the photos so far on this post, by the time I checked them it was too late. Here are some better ones, I hope. 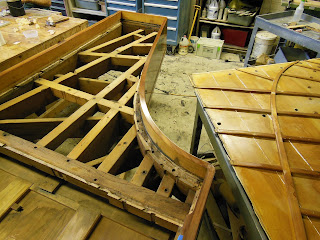 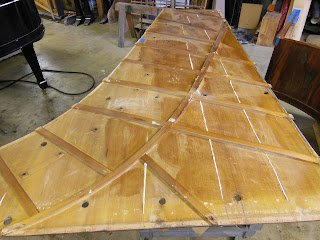 The thickness of the sound-board panel varies from 5.5mm to a little under 7mm. The curved longitudinal rib is laminated, vertically, from two pieces, the joint is barely visible. I don't know if they heated or steamed the wood, I doubt it, as spruce responds badly to being steam bent. Notice the interesting varnishing job on the bottom. There is a thin, wash coat of Shellac, but the rest appears to have been done with the board installed, probably at a later date.

The back of the instrument is workman-like, but not fussy, and in some areas rather hastily done, mostly Spruce, with its quarter-sawn face uppermost. The rest looks like Fir, or one of the Deals. If anyone knows what species this is please drop me a line.  http://www.erard.pianosrubenstein.com/contact.html 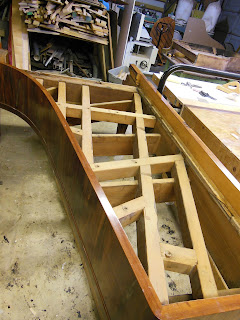 Joints are stub tenon, or sliding dovetail. Where a bolt occurs, there is an inset octagonal hardwood plug, very nicely done

Here is a picture of the ribs roughed out, the central spine consists of two pieces (Spruce) that will later be steam bent, and glued, the top bridge is made in a similar fashion. A modern multi laminate bridge can be made cold, and will hold its shape, but with only two laminations, there would be a large amount of spring-back. Below the steaming/laminating form takes shape out of layers of plywood, one side is a single piece attached to a stationary base, the remaining being individual movable blocks. The offset between the blocks is 30 mm, which is the width of the bridge before final shaping. Above the sides of the steam box before assembly, the box is eight feet long, by about six by six inches, just large enough to accommodate the long thin strips of the bridge and spine. Below; the box assembled. The parts to be bent are suspended on a row of half inch Maple dowels that span the interior of the box allowing the steam to penetrate from all sides. Steam comes from a
Read more
July 17, 2017