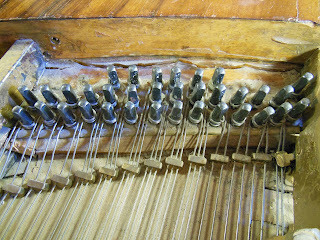 Most of the obvious damage to this instrument is in the pin-block area. The pin-block in this Erard is built of three layers of Beech. The first layer, which I will call the shelf, is a tapered board, consisting of two pieces edge glued together, with its thick edge towards the front of the instrument. The second layer is the pin-block proper. Like the shelf, the grain of the pin-block runs side to side, rim to rim, but while the shelf has one joint parallel to the grain, the pin-block has joints perpendicular to the grain, and is screwed, as well as glued to the shelf. 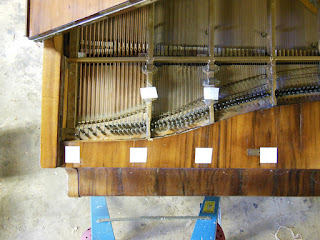 The third layer is the stretcher, which has decorative veneer (Courbaril) on its upper surface. All three layers extend to the front of the assembly, but only one, the shelf, is mortised into the rim on each side. The other layers simply sit on the shelf, and between the sides of the instrument. My miserable description will become more clear when we start to take apart the instrument, as the entire pin-block stretcher assembly will be removed.