Skip to main content
June 16, 2017
While I am completing the drudgery of removing the plate bearing strip, and the straight side sound-board molding, I would like to write a little about the Erard pin-block. This first picture shows the treble end of the pin-block stretcher assembly, I have replaced the upper stretcher pieces so that you can see the whole thing. 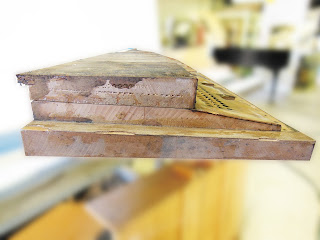 As you can see, the structure is made of solid Beech, cut roughly on the quarter, and not particularly close grained. The lower shelf is made of two longitudinal planks. The vertical line in the middle section, is a split, otherwise the middle section is one piece from side to side. The row of rectangular indentations in the top piece appears to have been made by a type of bench hook, as illustrated in this plate from Roubo, Fig 6. 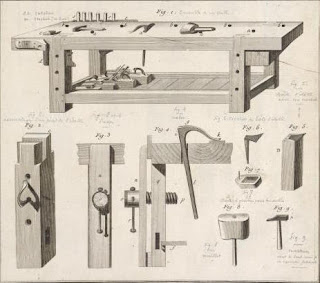 Beech is a very dense wood, more so than hard maple, and, in this case, it is cut correctly. So why do these pin-blocks deteriorate so badly. One reason, and the one most often given, is over-stringing, in other words stringing with wire that is too heavy. This instrument has a very short, and in original form, thin scale, which cannot be properly reproduced using modern wire, more about this, in a later post about scaling. The Erard pin-block has no forward flange. The top face of the block, leans towards the back of instrument. This angle increases in the tenor section, as the block is also becoming narrower. Individual string tension (in the original scale) also increases in the tenor. It is in this section that the damage to the block typically begins, and spreads into the treble. 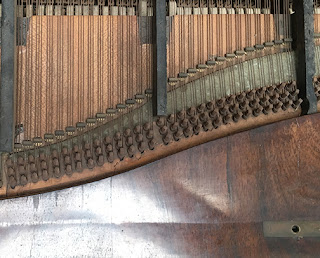 Above; you can see the pin-block starting to come apart, in this instrument from 1844, one year later than the instrument I am working on, (this instrument has its original wire, and has not been rebuilt). Notice that the pins are pulling out around the bar in the middle, and again on the left at the bass bar. The pin-block is actually weakest at the ends of the bars, because there is a buried structure that ties the bars to the shelf. Notice also the telegraphing through the veneer at the front of the stretcher, where the fascia meets the stretcher block.

I believe Erard was trying to improve on matters when they put two laminations at the top of the block. First a very thin layer of dark hardwood, running side to side and then, above this, a layer of lighter wood I can't identify (not Maple or Beech) with its grain running parallel to the strings.

When I started this project, I was sure I knew what to do about all this. Just build the whole structure out of modern, multi-laminate pin-block material. Now I think this is wrong. Not only does the extremely durable multi laminate material, provide the technician with a crappy tuning experience, I would not want (and this is going to sound extremely strange ) to deprive the instrument of the experience, if one can use that word, of falling apart again, in exactly the same way. Of course I could weld a hidden structure underneath, and use other modern materials, and the piano would never come apart again. This could all be cleverly concealed, and look exactly as it did originally, but what would be the point.

I took on this project in order to understand something about this Erard, how it sounded, how it was built, and how its makers thought, regarded in that light there is no room for improvement. 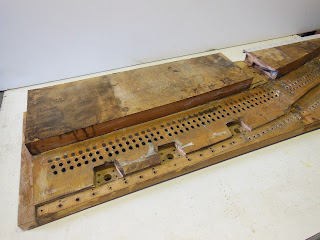