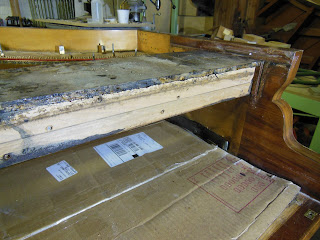 With the iron bar removed, we can see the three layers of the pin-block stretcher. The lowest level is the shelf. The shelf has a layer of decorative veneer on both sides, which on both top and bottom, extend all the way to the front. The species of this veneer is (Platanus hybrida) European Plane. The grain runs front to back as with cross-banding. the next layer is the pin-block proper, and finally the stretcher. 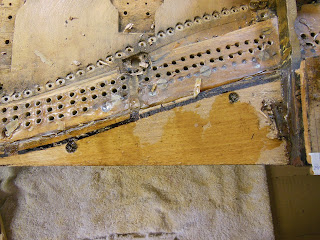 Above  a piece of the stretcher removed revealing the pin-block. Two wood screws pierce the block and penetrate into the lower shelf. The dark line is a layer of dark veneer under the pin-block face. The grain of the face veneer runs front to back. On the left, The central plate strut and its key. See below. 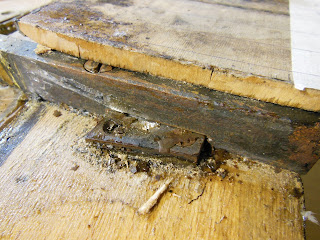 The strut is fastened by the one one wood screw, pictured, but is not attached to the key, which sits in a shallow mortise. The gouge running diagonally down from left to right, is the remains of an exploratory hole drilled by an earlier explorer. 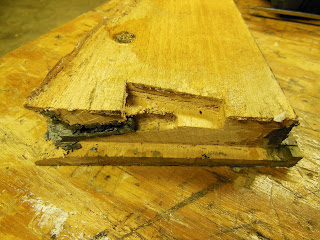 The reverse of the previous. The bottom of the stretcher, mortised to fit over the key, and the half of the strut. The diagonal drilled hole, is also visible, partially filled with black resin.